Check out this weekly crime report published by the Parker Police Department:

Posted by Bond Squad Bail Bonds at 7:47 PM No comments:


A combined effort from the Douglas County Sheriff's Office, the Castle Rock Police Department, the Jefferson County Sheriff's Department and the United States Postal Inspection Service led to the capture of Danielle McDaniel and Michael McDaniel for stealing from numerous mailboxes throughout Douglas County.  After all that and with more charges likely to be filed, the judge released both defendants on their own recognizance; i.e. their "promise" that they will show up to all of their court dates.  Yeah, they sound like upstanding citizens.  Way to look out for the citizens of the community, Judge!

Here's the press release from the Douglas County Sheriff's Office:


Two suspects have been taken into custody for stealing from mail boxes throughout Douglas County and the Town of Castle Rock.   The suspects were arrested as a result from a combined effort from the Douglas County Sheriff’s Office, the Castle Rock Police Department, the Jefferson County Sheriff’s Office and the United States Postal Inspection Service.

This investigation is on-going and there is a possibility that more charges will be filled against Mr. and Mrs. McDaniel in the future.  This investigation is still open and no further comments can be made about the specifics of this case.
Through the investigation numerous pieces of mail were recovered and investigators will be combing through the evidence for additional possible victims.  If anyone has any information regarding this investigation please contact Detective Chad Walker with the Douglas County Sheriff’s Office at 303-814-7007."

Posted by Bond Squad Bail Bonds at 6:11 PM No comments:

From our friends at the Douglas County Sheriff's Department:

Our Wanted Wednesday information is always posted on our Facebook page located at www.facebook.com/douglascountysheriff. Please consider sharing there as well.

As always, thank you so much for all of your help in locating these subjects. Your help is very much appreciated. 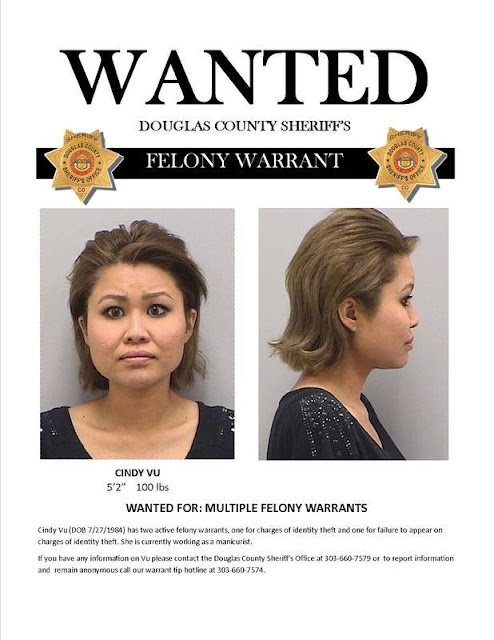 If you have knowledge of Cindy Vu's whereabouts, please contact the Douglas County Sheriff's Department at: 303-660-7574.

Posted by Bond Squad Bail Bonds at 5:45 PM No comments:

There will be 6 locations throughout metro Denver for residents to bring up to 3 legal size file folder boxes.  The event is free, but donations are requested and encouraged. 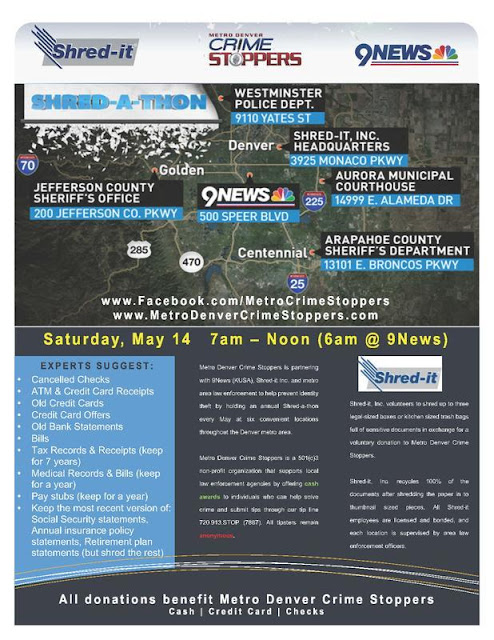 
Posted by Bond Squad Bail Bonds at 5:32 PM No comments:


We wanted to take a moment to recognize and wish all of the Moms out there a very Happy Mothers Day!!  None of us would be here without you!

Thank You; Moms, for your efforts, love and unwavering dedication to your families.

Police recovered five minors, arrested several adults for prostitution and trafficking during World Cannabis Week when thousands of tourists visited Colorado. Local, state and federal law enforcement agencies conducted operations to curb sex trafficking and exploitation, which resulted in the recovery of five children and the arrest of nine adults for trafficking and 26 adults for prostitution. Many other adults being trafficked were contacted and offered food, shelter, treatment and other services.
The sex trafficking operations were conducted across the Denver Metro area and along the Front Range during the week of April 18 because large scale events attract tourists and can also create a demand for prostitution. FBI personnel conducted research before and after “World Cannabis Week” in 2015 and noted a 35% increase in the number of online escort postings. Also, during this year’s event, nearly 40% of the escorts told police they traveled to Colorado for the special event.
“Whenever an event draws people from around the world, you will see an increase in sex trafficking,” said FBI Denver Special Agent in Charge Thomas Ravenelle. “The reality is major events will always have some organized criminal activity, including people who facilitate and profit from prostituting adults and children.”
The cooperative effort included participation from the Adams County Sheriff’s Office, Arapahoe County Sheriff’s Office, Arvada Police Department, Aurora Police Department, Castle Rock Police Department, Colorado Department of Corrections, Colorado Springs Police Department, Colorado State Patrol, Colorado Trafficking and Organized Crime Coalition, Denver Police Department, Douglas County Sheriff’s Office, Federal Bureau of Investigation, Golden Police Department, Homeland Security Investigations, Jefferson County District Attorney’s Office, Jefferson County Sheriff’s Office, Parker Police Department, Rocky Mountain Innocence Lost Task Force, Rocky Mountain Safe Streets Task Force, and Wheat Ridge Police Department.
One of the recovered minors, a 15-year-old victim, had been transported to Colorado from California by traffickers specifically for “420 Week.” Law enforcement arrested nine alleged traffickers on numerous felonies, including Pedro Davalos for Human Trafficking for Sexual Servitude. Police also arrested alleged pedophile James Brent Anderson, who allegedly made arrangements with an undercover officer to purchase a seven-year-old for sex.
A mugshot of James Brent Anderson can be obtained by the Jefferson County Sheriff’s Office. Pedro
Davalos was booked into Adams County.

Posted by Bond Squad Bail Bonds at 8:40 PM No comments:

Are you feeling buried by boxes of paperwork and bags of old receipts? If so, then it’s time to pack up your unneeded paperwork and bring it to the 2016 Shred-a-thon sponsored by 9NEWS, Shred-it Inc. and Metro-Denver Crime Stoppers.

Trucks will start shredding paper at 7 a.m. May 14.

The Shred-a-thon is a yearly fundraiser for the Metro-Denver Crime Stoppers program. For a donation to help fight crime in your community, you can have up to three legal-sized paper boxes or kitchen sized garbage bags of personal documents shredded on the spot.

Learn more about this important crime-fighting event by visiting 9News.com.


Arapahoe County Sheriff’s Office Transitions to New Uniform and Patch on May 1.
After more than 60 years of wearing the same uniform; with few changes, the Arapahoe County Sheriff’s Office will be wearing a different look starting at 6 a.m. on Sunday, May 1. The change will not only modernize the look of the agency, but will also be a cost savings to taxpayers.
Deputies have been wearing a medium blue shirt and striped pants, but will go to an all-black uniform. The new patch will now reflect Arapahoe County's history as the first Sheriff’s Office in the state and will also include the rank of each deputy. The new uniform will give deputies a more recognizable look as law enforcement personnel, and a look that is consistent with other agencies in the area.

The new shirts have built-in reflective features that can be exposed for safety when necessary. The old pants were hot in the summer, cold in the winter, and were inflexible and uncomfortable for the active work deputies are doing up to 12 hours each day. The new pants are flexible and durable, ensuring comfort and creating longer wear time.
Overall, between the costs of the new uniforms and changes in the volume of uniform items ordered, the cost savings will be approximately $167 per sworn employee over the long-term. That savings adds up for 485 commissioned deputies. Additionally, fewer uniforms will be issued to deputies generally
assigned to administrative positions, such as investigators.
The bulk of the savings comes from selecting a common uniform color. The shirts for the current uniform are custom-dyed. Not only has the Arapahoe County Sheriff's Office paid for the color, they also have to pay a stocking fee to the supplier to maintain adequate stock. This will no longer be the case. The Sheriff’s Office used its uniform budget from 2015 and 2016 to fund the initial uniform transition so there are no negative budget impacts for the change.
Arapahoe County Sheriff's deputies will wear the new uniform and patch with pride and look forward to continuing their great service to the community as they head into the next 60 years.
Respectfully,
Bond Squad Bail Bonds
bailbondsarapahoecounty.com
Posted by Bond Squad Bail Bonds at 8:11 PM No comments: